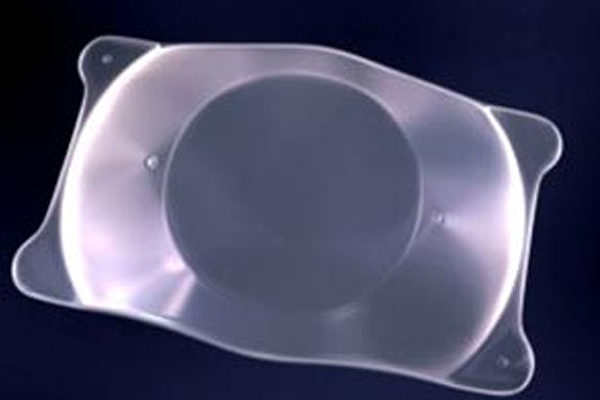 Surgically implanted lenses, also called phakic IOLs (intra ocular lenses), are a new option for people seeking more permanent correction of common vision errors such as myopia (nearsightedness). These implants, which resemble contact lenses, are placed between the clear front covering of the eye (cornea) and the iris (colored portion of the eye) or just behind the iris.

mplantable lenses are a surgical alternative to LASIK. Both procedures alter the way light rays enter the eye to achieve sharper focus. LASIK does this by removing tissue from the eye’s cornea to change its shape; implantable lenses function like glasses or contact lenses, except they do it from within your eye. Implantable lenses do not require tissue to be removed from the eye as with LASIK; these lenses are effectively added to the eye.

Eye surgeons may consider implantable lenses for their patients when other vision correction procedures aren’t a good option, such as in cases of thin corneas or high myopia. With some patients receiving phakic IOLs, LASIK may be used as a follow-up to refine vision correction.


Two Food and Drug Administration-approved implantable lenses now are available in the United States, including

Verisyse (Advanced Medical Optics, Santa Ana, Calif. Marketed as the Artisan outside the U.S. by Ophtec, Groningen, The Netherlands) In September 2004, one phakic IOL known as the Verisyse received FDA approval for correcting nearsightedness in moderate to severe ranges of -5 to -20 diopters; patients must be 21 years or older. Made of a type of plastic known as PMMA, this lens has been marketed for a number of years in Europe under the trade name Artisan.

Insertion of the Verisyse phakic IOL

How the Procedure Is Done?

Prior to surgery, drops are placed in the eye to reduce pupil size. An instrument is attached to hold open the eyelids during the procedure, and a local anesthetic is given to numb the eye’s surface. An incision then is made into the eye. The Verisyse phakic IOL is inserted and attached to the colored portion of the eye (iris).

The folded Visian ICL is inserted just behind the eye’s iris and in front of the natural lens. After being placed through the microincision, the artificial lens then unfolds to its full width following implantation, which requires no sutures. Once inserted during about a six-minute procedure, the Visian ICL is invisible to the naked eye because of its location behind the iris. It can only be seen with a microscope during eye examinations.

What Is the Visian ICL?

The Visian ICL is a phakic intraocular lens (IOL) used during refractive surgery for correcting myopia. Unlike IOLs that are used during cataract surgery, the Visian ICL does not replace the eye’s natural lens. Instead, the ICL is placed between the iris and the natural lens. Because the phakic IOL does not replace the lens, but supplements it like a prescription contact lens, it is sometimes referred to as an implantable contact lens.

What Makes the Visian ICL Different?

Although the Visian ICL is often informally defined as an ” implantable contact lens,” The “ICL” in the Visian ICL even stands for “implantable Collamer lens.” This designation acknowledges the unique material that comprises the lens.

Unlike other phakic IOLs the Visian ICL is made from Collamer, a unique, organic lens material, designed especially for the Visian lens. This proprietary lens material has greater biocompatibility than acrylic and silicone lenses 1. The Visian ICL is also foldable, requiring a smaller incision during the surgical procedure than other available lenses.

The safety and effectiveness of the Visian ICL implantation procedure has been proven with over 55,000 implants worldwide as well as recent U.S. FDA approval. Unlike corneal refractive surgery, the Visian ICL does not permanently alter the structure of the eye. Instead, the phakic IOL is placed in the eye’s posterior chamber, where it works with the natural lens to correct vision.

Unlike other phakic IOLs, the Visian ICL is foldable. This feature allows physicians to implant the lens using a smaller incision. The small incision procedure is a technique that is familiar to eye surgeons. The Visian ICL requires a 2.8mm to 3.0mm incision as opposed to the 6.0mm incision required by other FDA-approved phakic IOLs. This smaller incision is seen as less invasive, does not require sutures, and is astigmatically neutral.